ACMA, which has the responsibility of regulating Australian broadcasting (television and radio stations), has taken no action against the Rupert Murdoch-owned Sky News Channel, which like its U.S. counterpart Fox News, has been spewing out disinformation on the COVID-19 pandemic.

In fact on Sunday Sky News began being rolled out to the Southern Cross Austereo and WIN regional television networks, which means Australians in the bush will now be subject to the same coverage as those of their city counterparts. Sky is already the leading news channel on Foxtel and, according to its website, 'the highest-reaching Australian news brand on social media.'

Both the U.S. and Australian broadcasters have been debunking and ridiculing the wearing of masks, and the value of lockdowns.

Now YouTube has banned Sky News Australia and removed numerous videos of televised broadcasts the channel has posted in relation to its COVID-19 coverage. Sky will be unable to upload any new broadcasts and will not be able to edit any remaining videos for a week. If in the next 90 days it breaches YouTube's guidelines another two times it will be permanently banned.

Primetime Sky News host Alan Jones earlier in the week had his weekly column in Australia's biggest-selling newspaper, The Daily Telegraph pulled by Editor Ben English. News Corp however later in the week pointed out the decision was English's and in no way meant News was not standing behind Jones. Alan is one of Australias most accomplished broadcasters; his show on Sky News is achieving strong success and he has a widely read column in The Australian, a spokesperson for News Corp said. He is a compelling voice that has long represented the values of many Australians and his relationship with News Corp remains strong.

Sky News commentators supported those who took part in the protests against the Sydney lockdown last Saturday, while most in the community were appalled at the protesters' actions.

Both Sky News and Fox News have railed against their respective governments for the handling of the pandemic. The New South Wales Premier Gladys Berejiklian has been called 'a fool,' a 'village idiot,' 'out of touch,' 'incompetent, and 'unfit to govern,' due to her actions.

Fox News has turned on President Joe Biden, top White House scientist Anthony Fauci and other government health experts, in the same way. Sky News commentators have consistently bagged premiers from every state, and every chief medical officer. Every time they speak they diffuse the message governments are trying to put out to combat the pandemic. They quote so-called experts of their own and use fringe politicians such as Senator Ted Cruz and Lindsay Graham in the U.S., and Craig Kelly in Australia to support their stance.

Jones uses as his expert ridiculing the wearing of masks, Dr Colin Axon who is a senior lecturer in mechanical and aerospace engineering at the University of Brunei in London, who he describes as an adviser to the UK government. However Dr Axon, whilst he was an advisor to a government agency on ventilation in the past, is not currently an adviser.

Hannity joked that "If you stuck your finger in the wind, took a wild guess on COVID-related matters. You'd probably be more consistent than Fauci, Walensky, and the other so-called health experts in our federal government."

Hannity continued by showing a montage of Dr Fauci contradicting his own guidance over the past year, and wondered 'if the administration and health experts were just reacting to liberal media outlets.'

"Either way the Biden administration is sick and tired of we, the American people, not listening to the sage advice coming from their 'experts,' and they know just who to blame. When all else fails blame Donald Trump and his supporters," Hannity asserted.

It is not just Hannity, it appears to be the norm at the Fox News Channel. These are the headlines of the most recent stories on the experts broadcast by the popular cable news channel just over the past 5 days:

A top scientist emailed Dr. Anthony Fauci during the early days of the COVID-19 outbreak that the virus seemed like it may have been engineered.

A Twitter thread published Wednesday aimed to put a spotlight on "the various flip-flops" of Dr. Anthony Fauci and the Centers for Disease Control and Prevention (CDC) during the ongoing coronavirus pandemic.

Hannity: Have any Democrats, media members recanted their anti-vax comments?

Tucker Carlson examines the evidence behind the CDC's new mask recommendations and highlights how their new guidance is all about power.

Reps. Chip Roy, R-Texas, and Bill Posey, R-Fla., led a letter to the nation's top infectious disease expert in which they accuse him of appearing to "mislead the American people on the origins of COVID-19 and gain-of-function research."

Maryland man threatened Fauci, vowed to 'set on fire' he and his family, Justice Department says

A Maryland man is now facing federal charges after allegedly sending threatening emails to Dr. Anthony Fauci, including one vowing that he and his family would be "dragged into the street, beaten to death, and set on fire," the Justice Department says.

Ingraham: The scientists aren't president, or are they?

In her "Ingraham Angle" commentary on Monday, host Laura Ingraham said President Joe Biden "blew his chance" to unify Americans and to continue the successful economic policies of the Trump era.

Sean Hannity warned on his show Monday that coronavirus restrictions are coming back after Dr. Anthony Fauci suggested that bringing back mask mandates is "under active consideration."

Both channels supported former U.S. President Donald Trump, who consistently played down the virus, often referring to it as being comparable with the flu.

Sky News host Alan Jones has applauded the U.S. state of Florida for preventing counties across the state from mandating masks and implementing lockdowns. On Saturday Florida recorded its highest ever one-day number of cases at 21,683, fifty percent more than the whole of last week. Florida now accounts for 20 percent of all cases in the U.S. This despite the fact that 60% of people in Florida aged over twelve are vaccinated.

Despite the antics of Sky News in Australia, the Australian regulator has not even issued a caution over the apparent disinformation, which has been described by others in Australian media, such as 2GB host Ray Hadley and The Sydney Morning Herald columnist Peter Fitzsimons as "dangerous." Nor has it taken any action against the vitriol and abuse of the channel's commentators towards elected and unelected government officials.

Meantime Sky News Digital Editor Jack Houghton has hit back at the YouTube ban with a vigorous and lengthy defence of its COVID-19 coverage. "You have a right to debate Australias COVID-19 policies. Science, and the government's response to that science, are two very different things," he said in a statement posted on the Sky News Australia website."

"If that conversation is stifled our political leaders will be free to act with impunity, without justification and lacking any sufficient scrutiny from the public," he added.

ROME, Italy: Hundreds of Alitalia workers stopped highway traffic as they blocked an airport exit on Friday to protest that ...

PRAGUE, Czech Republic: The right-of-center Czech party, the SPD, which could be part of a new Czech government next month, ...

Experts say, after hurricanes, flood insurance rates to rise in US

NEW YORK CITY, New York: According to a study released by financial services provider LendingTree on Tuesday, updates to the ...

WASHINGTON D.C.: The World Organization for Animal Health said the first outbreak of the African swine fever, a fatal pig ...

UK reports shortages nationwide due to lack of truck drivers

LONDON, England: With Britain remaining short of tens of thousands of truck drivers, shortages throughout the country range from gasoline, ...

GLASGOW, Scotland: Energy provider INEOS has announced that it will convert its large-scale petrochemicals plant and oil refinery in Grangemouth, ... 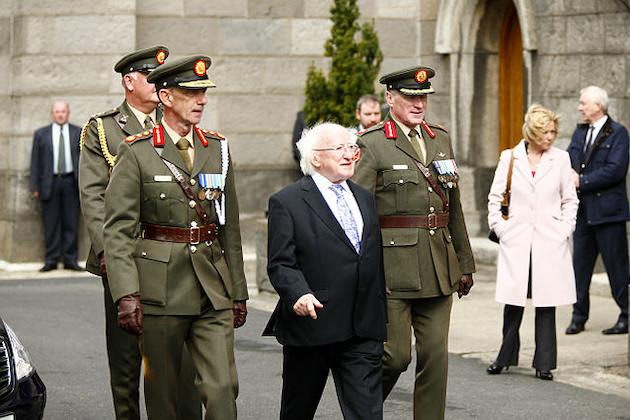 DUBLIN - Irish President Michael D. Higgins has said he will not attend a religious ceremony alongside Queen Elizabeth II ...

On September 15, 2021, the heads of government of Australia, the United Kingdom, and the United States announced the formation ...

PARIS, France: French and Indian foreign affairs ministers Jean-Yves Le Drian and Subrahmanyam Jaishankar have agreed to work on a ...